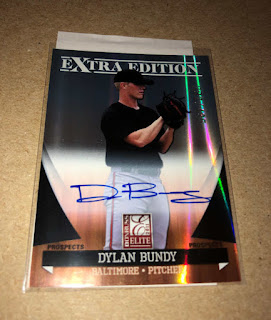 I dug around COMC at various points last winter and picked up these miscellaneous certified autographs for my Angels all-time autograph collection - an on-card autograph of Dylan Bundy was probably the most prominent.

After he was traded to the Angels last off-season, I wanted to see if I could snag one at some point - I still remember Bundy coming into the pro ranks as a hyped up prospect and still have some a couple of loose, empty boxes of 2012 Bowman Draft with his picture on them.

Maybe I could have picked up a certified autograph from one of the Bowman releases from the time Bundy was a stud prospect, just to have something with him pictured in a big league uniform - but something more 'generic' and almost without a team affiliation listed, might have been the more ideal card since he was going to be Angel anyway. 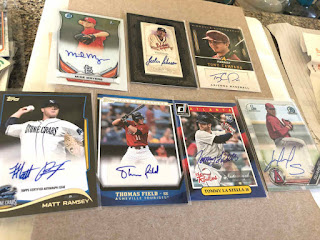 One of the things I like is being able to rummage around and see if I can find some of the most random cards to add to my Angels all-time autograph collection - maybe I have to double check if each of the players such as Matt Ramsey, Thomas Field and Tony Campana actually played for the Angels, but I can nerd out a little finding out they did and can squirrel away their 'junk certified autos.'

As the case maybe these cards often picture players from a hodgepodge of teams, from the minors to the major leagues - I'd really like to put a premium on cards that picture players as an Angel, but I'll take what I can get.

I did find an an an autograph of Jose Suarez, who might have been the team's top pitching prospect entering the 2019 season, thought that may be the equivalent of the No. 15 [or lower] ranked prospect in a deeper MLB organization - I don't know if he's gotten a real extensive look the past two seasons but he's still either young and inexperienced or just doesn't know how to get big league hitters out to stick for good.

I grabbed an autograph of Mike Mayers, pictured as a one-time St. Louis Cardinals prospect years ago - he was an an under the radar find that actually had a great year out of the Angels bullpen in 2020.

I grabbed an autograph of Julio Teheran, just so I don't have to worry about digging up the random in-person autograph card I got when he was still a top prospect at the 2010 Futures Game - he was a longtime starter with the Atlanta Braves with mostly positive results, though maybe the writing was on the wall with his peripherals in recent years and the gamble the Angels took on him failed.

Finally I grabbed an autograph of Tommy La Stella, a previously useful if unheralded platoon player with the Atlanta Braves and Chicago Cubs - who had a chance to play on an every day basis with the Angels a couple of years ago and continued to play well for the Angels this past year before being traded to the Oakland Athletics.

La Stella found some pop in his bat and was named to the All-Star team in 2019 - before a broken leg derailed his season.

I might have gotten a couple of La Stella in-person autographs, once in the Arizona Fall League and once in spring training - I think since he signed only one, the cards I'd gotten inked up were for sets I was chasing, so I wanted one outright.

I hope nothing 'funny' was going on when the certified autograph card from 2014 was signed - but it looks more of a complete, 'fancier' autograph, than any other versions of La Stella's I've seen.

Nice pickups. I cant keep up with the revolving door of Angels players the last 20 years or so, as far as autographs go.

La Stella hit well for the A's. I wonder where he'll land in 2021. If I were the A's I'd try to sign him as their everyday second baseman.