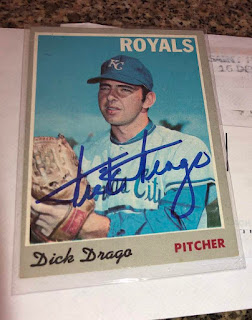 I got an return to send earlier in the year even as other collectors seemed to report regular successes with the former big league righthander - there are a couple of addresses posted for him in collecting forums I belong to and I guess the one I used in my first request was the wrong one.

I waited a little bit and took another shot, using the other address and finally - got my card signed in about a month or so arriving a couple of days before Christmas.

I only had a 1970 Topps card in my collection, featuring a cleaner cut Drago, who was a dependable starter early in his big league career with the Kansas City Royals - through the late 1970s, he became a reliever who bounced around several MLB teams and had started to grow out some prominent facial hair for for his era.