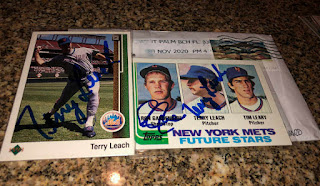 The former big league reliever signed my cards in about a month - including a 1982 Topps multiplayer Future Stars card I had longtime MLB manager Ron Gardenhire sign in-person.

All I need to finish off my card is Tim Leary, who might have done his share of former LA Dodgers appearances in So. Cal over the past 10-15 years - he's never been someone I've been compelled to be interested in, but now I have to see where someone might do a signing with him.