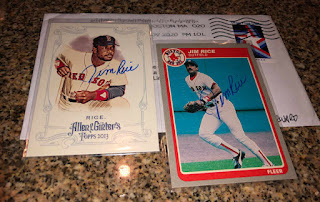 After holding off since my last success in 2017, I finally sent another request with $20 to Rice and he returned my cards signed in 8 days - the 2013 Topps Allen and Ginter was the only non-insert Ginter I still needed, so that was a priority.

I also sent a 1985 Fleer I found in a Dollar Tree repack - the 'pre-junk wax era' cards through mid 1980s holds some allure, probably because that is where the good rookie cards from that era came from and there is some trickle down interest, even if the cards came out before my time.

The flap on my SASE was loose and I was might have panicked a little- but the cards were still in envelope.

I picked up an autographed card of his earlier this year - his signature is beautiful! Congrats on the return!