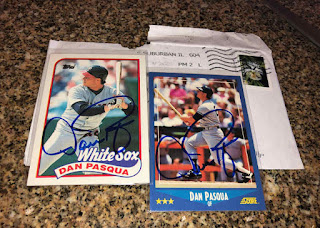 The former big leaguer from the mid 1980s through early 1990s signed a couple of my cards, responded briefly to the what I'd written him and returned my other two cards unsigned - Pasqua played through the junk wax era as more of a rank-and-file player, who didn't put up the sexiest numbers as a hitter, but had some pop in his bat.

Flipping through his early 1990s cards, the bespectacled Pasqua didn’t look like any sort of athlete - while his MLB career petered out after turning 30, to cherry pick a run of years where he was most successful, Pasqua put up a decent slash line [.251 / .337 / .455, including a 118 OPS+] through his 20s.

Not sure what an athlete is supposed to look like but Pasqua was one of the most muscular players in the majors in the '80s with the Yankees.

That makes sense - it's the glasses he wore in some of the early 1990s cards that made me wonder.