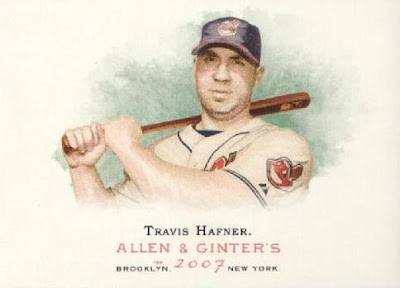 Are these the same guy? Almost sure looks like it to me....

Then and now: Travis Hafner
2007 Topps Allen and Ginter #287 - what the heck happened to this guy's career? It seems like he has lost his mojo. Cleveland Indians fans are probably hoping for the best, but after fighting through a sluggish season in 2007, Hafner has been MIA for pretty much the entire season so far.

He once looked like one of the most feared hitters in the American League, but now he can't swing the bat effectively while not being able to get on the field - even when he was playing, he only put up a .326 on-base/.350 slugging percentage in 46 games, spanning 157 official at-bats.

I hate to say it, being an Indians fan, but I don't think Hafner's coming back.