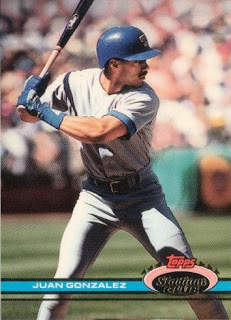 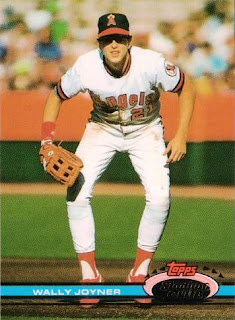 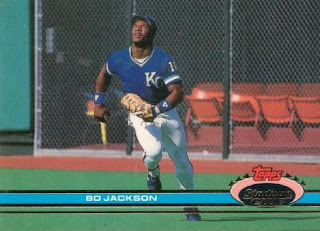 Pack breaks: 1991 Topps Stadium Club Series I [x2] - I saved these two packs from a 10 pack purchase of 1991 Stadium Club just to put away. I was bored, holed up in my room on a hot afternoon, so I ripped into the two packs impulsively.

Pack Two
#15 Mike McFarlane
#281 Mike Simms - local Orange County California guy, who went to my high school [Esperanza High in Anaheim]. He was a bench player for several years in the Major Leagues. 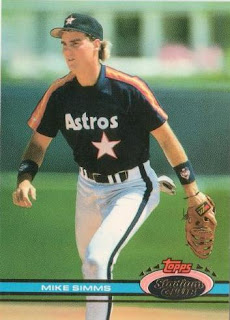 #155 Jose Canseco - likely juiced up, he was still a dominant Major League player at this point of his career. 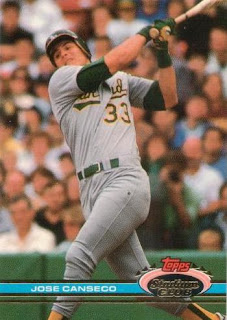 #2 Wally Joyner - 'Wally World' was on its last legs when this card was printed. Here is about a three minute, highlight reel/endorsement/informercial featuring Joyner and Xocai healthy chocolates. I don't know if he is still pimping the product, but at least he isn't touting the virtues of steroids.
Topps Stadium Club membership filler card
#98 Brian Harvey
#164 Chris Bosio
#79 Bob Welch
#253 Mike Greenwell
#190 Jose Oquendo
#57 Frank Thomas - I didn't scan this card, because I pulled the same card out of the initial break I had with these cards late in 2007. When I think of Thomas and his cards, I can't imagine how much time has passed [18 years] since he was the hot player [think Albert Pujols] to collect. The 1990s have passed on, but when I think back to certain moments or see certain items, still seem like only yesterday in my mind. I guess I am old.
#224 Bo Jackson - I don't know what to say about Bo, except it has been a long time since he has been relevant. He was once was a two-sport star in two professional sports [Major League Baseball and the NFL], one of these mega superstar [maybe not in achievements] athletes whose image was plastered everywhere.
#237 Juan Gonzalez - I wanted this for my collection, since it was one of his key cards, even though it wasn't a true rookie card.
Posted by Laurens at 1:28 AM
Labels: 1991 Topps Stadium Club, desperation, forgotten stars, pack break, premium set