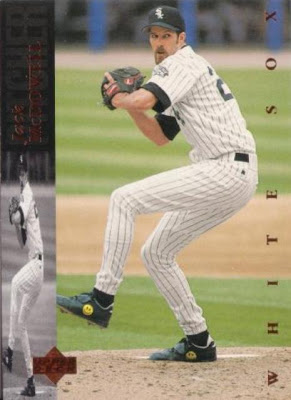 Featured card: Jack McDowell 1994 Upper Deck #395 - when going through a pile of commons with the intention of finding something unique, sometimes it is a needle in a haystack. However, you do find hidden gems that make you smile.

Looking at the back of this card - McDowell was at his prime, coming off two 20-win seasons. This was at his budding musician stage, before he gave the finger to New York Yankees' fans as a Yankees' pitcher, before his arm was completely shredded by the end of the 1990s.

McDowell spent a forgettable last season in the Major Leagues as an Anaheim Angel - going 0-4 in four starts, getting pounded for 31 hits and 17 runs in 19 innings pitched.

McDowell had very good Major League career, built upon his prime years in Chicago - he finished with a 127-97 won-loss record, making 275 starts in his 277 appearances in the Major Leagues. His lifetime ERA was 3.85 and he struck out 1311 batters in 1889 innings pitched.
Posted by Laurens at 2:50 PM
Labels: 1994 Upper Deck, Chicago White Sox, finger, Jack McDowell, New York Yankees, smiley

I still haven't really gotten around to collecting 1994 Upper Deck. That came out when I was taking a long break from the hobby. Seeing Black Jack with those shoes makes me want to track down the team set. Great post!