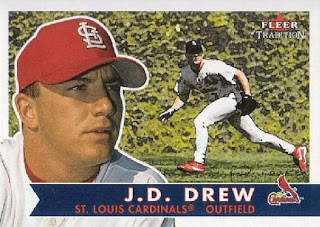 Featured player: JD Drew
2001 Fleer Tradition #328 - Drew has found a home in Boston and has led a charmed life so far. It only adds to what he has done as a Boston Red Sox' player, when he led the American League to a 4-3 all-star game win Tuesday night/early Wednesday morning.

Drew was the star of the 15-inning affair that lasted four hours and 50 minutes - his two-run home run in the 7th inning tied the game at 2. He went 2-for-4 with two RBIs, a run scored and a walk.

I don't particularly like him because he was supposed to sign autographs [at a furniture warehouse store] on a Saturday morning in 2006 - unfortunately, he got hurt during the game the night before [hit by a pitch] and didn't show up to the scheduled appearance. It all seemed typical, where he'll find an excuse to beg out of something, if he has any opportunity to do so.

However, for a moment, you think back to when the turd opted out of his contract with the Dodgers - and wonder if he and superagent Scott Boras actually knew what they were doing. Boras set things in motion, where his client was going to get get more money and going to a place, where [Drew eventually played a pivotal role in leading the Boston Red Sox to a championship].

There is sort of the 'detached' professionalism he exudes that has paid off already [he is a professional hitter] - It is just so ironic how things unfolded and after having a crappy season, the bastard [is a] part of a World Series championship team [and adds another trophy to his mantle and an new Chevy Tahoe hybrid SUV in his garage for his all-star game performance].
Posted by Laurens at 2:26 AM
Labels: all-star game, all-star MVP, Boston Red Sox, clutch, J.D. Drew, pampered, spoiled, Yankee Stadium