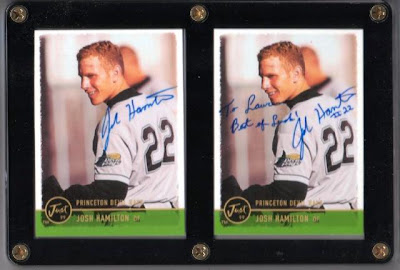 Featured player: Josh Hamilton
I was napping for the start of the Home Run Derby, it gets boring and long winded in-between the players actually hitting some home runs.

However, I slowly rose from my slumber as this Josh Hamilton guy woke me up - with prodigious, monumental blasts launched at Yankee Stadium with an easy, effortless stroke.

He might not have won the Home Run Derby - but his 28 home runs in Round 1 provided all the fireworks. It was an exhibition for the ages.

Everyone in New York was in awe and wanted to be part of the action - the crowd was electrified, on the their heels, seeing how far Hamilton would hit his next home run. Hanley Ramirez was mimicking Hamilton's stance. Hamilton's teammate Milton Bradley was taking photo ops with Hamilton and taking in the fun.

Their self-fulfilling prophecy about the great hope redeemed is realized and from phenom to crackhead - the sky is the limit for Hamilton.

PS: Some other guy won the Home Run Derby. I think he may have been Canadian or something, so it doesn't count. I keed, I keed Justin Morneau fans.
Posted by Laurens at 9:15 AM
Labels: Home Run Derby, hype, Josh Hamilton, Justin Morneau, New York Yankees