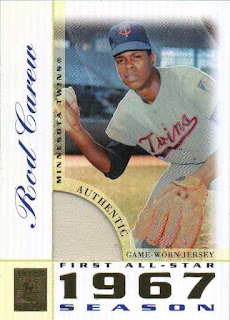 I didn't realize I had a random Topps insert card autographed, featuring Carew as a Minnesota Twins uniform - so I pick up this card for $4 since Carew was named the 1967 American League Rookie of the Year.

I don't really end up caring for retro cards because I feel like they just 'aren't the real thing' as far as original old-school/vintage cards - Topps has just pumped them out over the last 10 years and I feel they tend to be redundant, especially when Topps recycles images to use on cards.

As is, retro cards are much easier to find and use for random card projects that need old-time legends / icons - at the very least, retro cards give a refreshing, if anachronistic look to showcase players from from the past.

Some retro cards stand out more because they can be shiny, can feature an autograph and/or a 'game used' relic - I like how some cards specifically highlight players' award winning seasons and/or recap the players' career highlights.