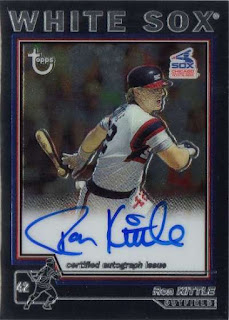 I picked up a Kittle certified autograph for my award winners collection - I think the 1983 American League Rookie of the Year signs through the mail, but it's too much work to put together an autograph request these days.

In 1983, Kittle was a hot rookie with a hot card [1983 Fleer #241] but just didn't live up to whatever hype he generated in his first year - on the junk wax cards I stumbled upon around the time he played his last few seasons as a MLB player, the fact that Kittle wore glasses made me think he didn't look that part of professional athlete.

A popular guy in Chicago he spent some time as a minor league manager out in the Chicago boonies.

I remember Kittle's rookie card being a hot commodity. That's right about the same time I was getting serious about collecting. Picked up his signature as well... mainly for nostalgic reasons.