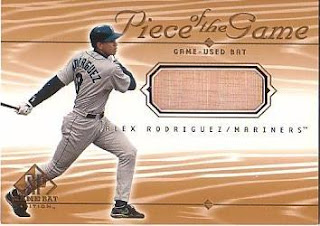 Alex Rodriguez - New York Yankees - I think I've been waiting a while, expecting to make this post already. It was A-Rod's award to lose and he obviously deserved it, along with a new $275 million 'extension' he'd jockeyed for ever since he opted out of his contract just before the World Series ended.

He might just be [he is] the best player people have seen in decades - Barry Bonds has 762 home runs, but if A-Rod is just several 'big' seasons away from that number and it looks like he is going to do it within the next five or six years, not at an age, where you need HGH or other performance enhancing drugs. For whatever reason, I think A-Rod is a guy who has other interests to pursue and will not be playing baseball long enough to reach Barry and beyond. On the other hand, his new contract clearly defines, Rodriguez will be expected to chase the all-time home run record in the Major Leagues.

I remember paying at least $18 for the card - it maybe worth a third of that, but I bought it when Upper Deck released its 2001 Upper Deck SP Game Bat Milestone Edition Baseball product. A-Rod was one of the established superstar players of the day [still is] and I thought I just had to get a bat card of his. Now bat and jersey cards are a dime a dozen [even for superstars] and they aren't special anymore, unless you really just want one for your personal collection.
Posted by Laurens at 2:58 PM