Featured Breaks
1991 Topps Stadium Club [$0.75 each or 10 for $5] packs - I busted eight of the 10 packs I picked up from a card shop's unopened clearance bin and the 'superstars' I pulled were Frank Thomas, Wade Boggs, Don Mattingly and Greg Maddux [x2]. I wasn't going to pull any single cards out of this product worth mentioning [anymore]. However, when every 'modern day' pack at the shop I visited was at least $5 or $6 each, I was looking for loose packs maybe on 'we just want want to get rid of this crap' discount.

Considering this was one the hottest products of its time when it first came out, I had to 'fish' for some of these packs - especially when products like these, when they first came out, was something really mystical to me. The serious collectors had 1989 Upper Deck, 1990 Leaf and 1991 Stadium Club, and I had 1991 Donruss, 1991 Fleer and 1991 Topps.

The 1991 Stadium Club boasted photo quality images and in its prime, was not regarded the same as 1988 Donruss - I tore through the packs knowing its pretty much a dead product, though still feeling like I was making up for something I never had.

I also pulled random California Angels [Chuck Finley, Brian Harvey, Luis Polonia, Lee Stevens, Mark Langston, Mike Fetters among a few others] and minor stars like Larry Walker, Moises Alou, Gary Sheffield, Craig Biggio, Omar Vizquel, Eric Davis, Paul O'Neill, etc - its funny, but perspective changes over time and I'm mentioning those players like their cards were worth pulling back then [or now], when they were all commons. Now, you can take a look at someone's statistics on Baseballreference.com and realize how Biggio is in the 3,000 hit club, how Sheffield and Alou are still playing and players like Walker, Vizquel, Davis and O'Neill were considered 'stars,' if not all-star performers. 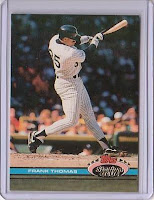