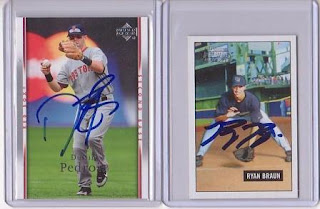 2007 Rookies of the Year
Dustin Pedroia [American League] - he was the only Boston Red Sox player I got an autograph from this past year [on a card] and I almost had to beg him to sign my card. I couldn't believe I'm taller than he is.

I think the random little things I'd read on prospect sites such as "Baseball America" was while Pedroia was David Eckstein [like] - Pedroia's offensive skills with the bat was a little more defined and not to sell him short. To date, he's proven nearly everything said about him to be true. It just remains to be seen what he'll do for an encore.

I don't believe in 'man-crushes -' but here is this little guy who just kept hitting and hitting. He hit a home run in Game 7 of the American League Championship Series to help the Boston Red Sox win the pennant and hit another home run in the World Series.

It is fascinating how this guy grinds it out - I like how he 'comes out of his seat' to hit. The difference between him and Eckstein is Pedroia isn't the 'aw-shucks, I'm glad to be good at baseball kind of guy,' but a guy with a pronounced self-confidence who is going to kick your ass on the field.

Ryan Braun [National League] - I got the autograph in spring training of 2007 and it only reminds me I should have gotten him on something better than just a card. He signed two cards [maybe out of four] in the rain, but the other one didn't come out clean.

I remember when I could have gotten signed 8x10s of this guy - in Miami Hurricanes gear for about $5 each if I bought four since a 'local' promoter had done a signing with him. Now, he is Rookie of the Year and those 8x10s are long gone [or at least marked up]. Hopefully the next Braun, the next Pedroia is someone I'll be able to see and believe in as far as having a 'banner season.'