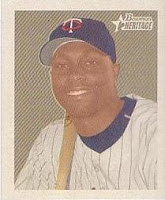 Actually this card was just lying around - but the Los Angeles Angels of Anaheim signed the real thing to play centerfield for the next five years.

I nearly choked as I heard on a sports update he was going to the Los Angeles Angels and not the Los Angeles Dodgers - it is a solid move and seems like he has always been a stand-up, face of a franchise guy otherwise, but it came out of nowhere.

Compared to the signing of Gary Matthews Jr. last off-season, Hunter is actually a first-class centerfielder, not a fourth-outfielder type getting first-class money - Hunter is a perennial Gold Glove winner and while his on-base percentage is not particularly special, he is capable of doing a little bit of everything when he isn't out on the field. He can run a little, but more importantly, he is capable of hitting in the middle of the lineup, having hit 20 or more home runs in six of his last seven Major League seasons. He has also driven in 90 or more RBIs, in five of those last seven Major League seasons.

While Hunter maybe 32 years old, I would tend to believe good athletes like Hunter age better than others - I think he'll make up for the energy lost by trading Orlando Cabrera and it will be fun to watch him.

Now if the Angels can only secure a pure slugger, someone like Miguel Cabrera or a solid all-around shortstop like Miguel Tejada - then the offseason will truly be complete, with the addition of a starting pitcher [have], a Gold Glove outfielder [have], a slugger [need] and a shortstop [need].
Posted by Laurens at 12:17 AM