2007 Topps Update [x3 for either $5 or $6 at a local show] hobby packs - yeah, it's cheap stuff people and there is just nothing to talk about here, unless you want to talk shop about the hard to pull gimmick cards featuring Joba Chamberlain's reversed image, Tacoby Ellsbury and a rodent that has apparently seen more air time than some of the New York Yankees' finest players.

Random thoughts
1.) Topps' printing process seems harried - for whatever reason, I like the idea of busting a few packs of Topps product, when it is relatively new. Unfortunately you get frustrated when you are pulling cards 'fresh out of the pack' with corners nicked up showing white and various imperfections all over [front and back]. I know the cards are glossy and black bordered, but I guess these are cards to 'flip' instead of put in a showcase somewhere.
2.) Photography - the images are sometimes obscured by the black borders. My big complaint is flipping through a pack of Topps base cards and the images seem to be all over the place: pitchers pitching, hitters hitting, catchers squatting, fielders fielding, guys picking their butts, etc. It would never occur to the people who actually selected the photos to pick out something out of the ordinary - at least not for the base Topps set. Topps Stadium Club had better photos, capturing your imagination. It was continued two or three years ago however.
3.) Filler cards and inserts - I'd rather have cards of obscure young players and obscure players who've been released five times, only to get a cup of coffee in the Major Leagues this past season, INSTEAD OF ALL-STAR CARDS OR GENERATION NOW INSERTS OR BASICALLY ANY CARD I CAN PULL SOMEWHERE ELSE. 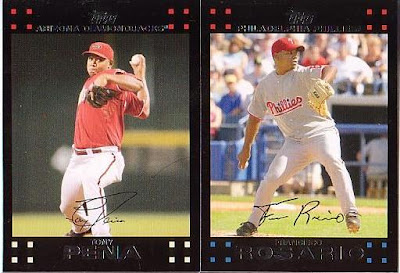 Tony Pena - not junior or senior; an unrelated one pitching for the Arizona Diamondbacks. Ironically, he was formerly known as Adriano Rosario, who I thought was traded or just released because they found out he was older than they thought. I thought he was the guy I pulled earlier, pitching for the Toronto Blue Jays [Francisco Rosario].
Homer Bailey - qualifies as a card with no status [because his rookie cards came out in 2004], but whom I consider a 'name pull' out of the pack because he was c

onsidered a top prospect at the beginning of the 2007 season.

What does one do with the Justin Uptons, Cameron Maybins, Phil Hughes, Kurt Suzuki, Hunter Pence, Ryan Braun cards if they are worthless - yet they had their moments in 2007 as first-year Major League players. Unlike in years past, with the MLBPA rookie card rules, this product is more of an update set for the Major Leagues and there are no first-year rookie cards of guys essentially still playing in the minor leagues.

Macay McBride - qualifies as an update card
David Ortiz - red back; all-star subset card
Yovani Gallardo - red back; put him on the list of guys to be excited about pulling, if the card had actual status because they had no cards printed before this year.
Jose Molina - gold insert serial numbered 1153/2007
Scott Linebrink - the Molina and Linebrink cards makes you realize at times, you are just collecting pictures of adult men, instead of athletes.
Takashi Saito - all-star subset card.