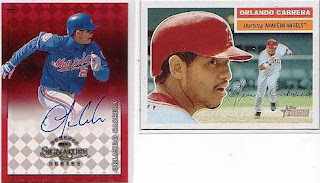 Orlando Cabrera for Jon Garland is an interesting move - Cabrera is supposedly an aging shortstop who is coming off a career year - he was also the best athlete on the team [sorry: Chone Figgins] and the quarterback of the infield. I think the Angels will survive because they have millions of owner Arte Moreno's money to spend, but not having a capabale backup catcher [Jose Molina] may have hurt them this past postseason and now they've traded away a guy who is a wizard on defense and a clubhouse leader.

I think Erick Aybar is going to be given the first opportunity see what he can do at shortstop - he was the Angels'top prospect at the position for the last several years, though he hasn't gotten an extended opportunity to prove himself as a big league regular. Maicer Izturis can also play shortstop and may actually start, though his ability to stay healthy the entire season is a question mark. Izturis maybe more of a supersub, filling in on an everyday basis.

Garland, who may or may not be part of another, significant deal is what he is and that maybe just good enough - the So.Cal native keeps his era around mid 4.00 level and while it isn't particular impressive, it looks like he keeps his team in games. He has recorded double digit wins in the past six seasons and is fairly durable, throwing 200 innings or more in the past four years.

As for the rumored trade talks for guys like Miguel Cabrera and also Miguel Tejada - I'm not holding my breath, though obviously it would be great to have either one [or both] on the left side of the infield for the Angels.
Posted by Laurens at 1:11 AM