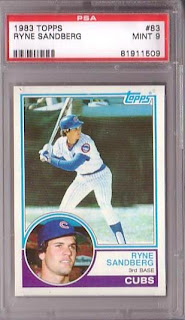 1983 Topps Ryne Sandberg PSA graded '9' rookie card [$20.00 plus $4.00 s/h on Ebay] - a Ryne Sandberg rookie card may have been in bigger demand in collecting circles back 1990, but how many key baseball rookie cards do I have from the last 30 years? Getting 'traditional rookie cards' still resonates with me, even though there doesn't seem like the demand is there at all. I still want to build that ideal collection of cards, that would dominate a neighborhood collection [back in 1989, 1990 or 1991]. Though it is graded a '9' by PSA, there is some damage on the top part of the card, along the 'blue' border is. I saw it after I'd already won the card and it goes with the influence of trying to secure cards for your personal collection [impulsively].

2007 Sweet Spot Classic Roberto Alomar auto [$15.99 BIN plus $4.00 s/h on Ebay] - Alomar's career sort of died a slow death during his last three years [everyone said he was a lock for 3,000 hits] and it seemed shady how he just lost the feel for the game. In his umpire-spitting prime however, Alomar showed he was one of the gifted players in his position, starring for the two-time World Series champion Toronto Blue Jays of [my early 1990s]. He was one of the guys I'd only seen a few times [I think 2003 was the only time in-person ] and my only autograph of his was a 1993 Upper Deck card mailed to him nine or 10 years ago. He didn't seem to be an easy autograph to get by the time I'd actually gotten my one shot at him, but you still sort of think he was a superstar [and someone you'd pay $20 to get a nice, certified autograph of]. If no one else knew how good this guy was or perhaps how tough to get a random scribble from, then it is to my gain.

2003 Topps Retired Signature Luis Aparicio certified autograph card [$9.99 BIN plus $2.50 s/h on Ebay] - it is a hard signed card, but it is enclosed in a case, which is hard to display in a collection stored in nine-pocket pages. It won't kill me either way, but I'd rather leave it in the case than take it out [unless it is necessary]. For my Hall of Famer collection, I would like to get a single-signed baseball and a Hall of Fame yellow postcard for as many living players as I can get, but I need a certified autograph card of Aparicio anyway. He is not only a Hall of Famer, but also the 1956 American League Rookie of the Year. Realistically, he maybe a more common autograph to get otherwise [I think he signs a lot at the MLB All-Star Fanfests each year], but doesn't quite come out to the West Coast and do many public signings.

Upper Deck Masterpieces Hanley Ramirez certified autograph card [$12.51 plus $3.00 s/h on Ebay] - I've been only a Ramirez 'kick' lately and like Aparicio was a Rookie of the Year winner [2006 National League]. I like the fact this is a hard signed card and better looking than his 2006 Bowman Originals releases, since those were signed on those repetitive Futures Game card subsets. I think picking up a few singles I like is my way of buying into a new product, without picking up a full box of cards.
2007 Bowman Heritage prospect/base sets [$19.99/$20.99 BINs plus $9.50 s/h on Ebay] -Bowman Heritage has been talked about ad neausum in other baseball card related blogs, so people know what these look like. I had a 'write-up' for these already saved, but I lost it cutting-and-pasting [thanks Blogger auto-save] my little notes.

Anyway, the reason I picked up these sets:
1.) For the true rookie cards and first-year prospects - Tim Lincecum, Daisuke Matsuzaka, Hideki Okajima, Joba Chamberlain, Akinori Iwamura, Mark Reynolds, Jeff Samardzija, Joba Chamberlain [he has a base Bowman Heritage card and also a prospect Bowman Heritage card], Matthew Sweeney [Angels], Chung Young-il [Angels] and numerous others [I have yet to learn about].
2.) For the MLBPA rookie logo cards - the hot Major League Baseball rookies of 2007 who just happen to have rookie cards from previous years already.
3.) To have a complete set for the price of about two blasters or one hobby box - didn't know the shortprints were variations of cards already in the set, so its pretty nice to actually have a 'full' card set without really missing a small subset of shortprints.
4.) I could really care less about the veteran cards - and while interesting, I won't bother marveling over the recycled background [special background, et al] variations within the base set or the little notations Topps has included on some players' images.
Posted by Laurens at 6:02 PM