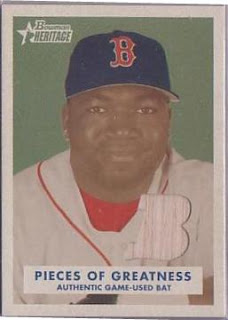 More Featured Mail Days
2006 Bowman Heritage David Ortiz bat card [$2.00 plus $3.00 s/h on Ebay] - I realize this card isn't worth much, but its a card I picked up just because he's been such clutch performer and even while some the damage was at the expense of my hometown team, you have to respect his ability. He can mash the ball all over the field and while he is all brawn, he'll also bunt for a hit when he sees defenders position in the exaggerated pull shift. While he's only a DH these days, he should have at least one MVP award. over the last few years. He's a leader and a calming influence on a team of World Series championship winning, star performers. 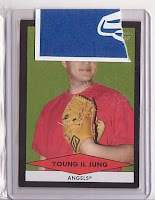 2007 Bowman Heritage Chung Young-il black parallel serial #'d to 52 [$19.99 plus $3.25 s/h on Ebay] -I thought I'd pick up a low-numbered first-year parallel card of an 'intriguing' prospect from the Angels. It isn't a sure thing that any pitcher will make much of an impact after signing a professional baseball contract, but I thought it might be worth a gamble since there is also an Asian factor coming into play.
When I received the card, I was kind of pissed off at the condition - the right hand side of the card is peeling and the card obviously is imperfect. I didn't expect getting a card in-hand grading no better than a '6.' I think the problem is this cards are condition sensitive and 'pack fresh' means even less for a black bordered parallel card. I guess I'm just going to have to swallow it, since I was so 'gung-ho' in looking to get this card.
Posted by Laurens at 8:15 PM