Derek Jeter to be out to pasture after 2014 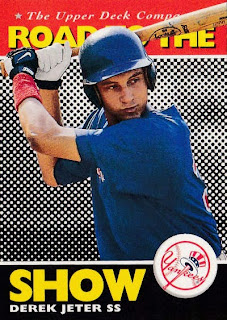 Supposedly this upcoming season will be Derek Jeter's last as a MLB player - while I have no particularly affinity for any of his particular individual accomplishments or 'team achievements' i.e. five championships rings, what I'll miss most about Jeter is the idea that this guy played to win and nothing else mattered.

Jeter was built up as a guy who was great competitor and even though his year-to-year numbers were not quite as dominant as the stat monsters of his era - he had the ability to focus and be in the moment, a guy who came through at the most opportune moments.

He generated hit after hit and made highlight reel plays on defense - even though that part of his game has been derided for years by a collective group of people smarter than everyone else.

Among the other things I'll miss about Jeter are the little clips that might capture his personality, his mannerisms perhaps - the fist pump, and maybe a 'loose, confident smirk' here and there.

Unlike his notable teammate who went on a 162-game sabbatical recently - as 'polished' and maybe as 'made up' as Jeter might be, you'll never catch Jeter talking out of both sides of his mouth.

While Jeter is a pretty private guarded guy off the field with a reputation to uphold - he's also been matter of fact in the interviews I've seen and has always maintained the aura of being this down to earth guy with a responsibility towards the game.