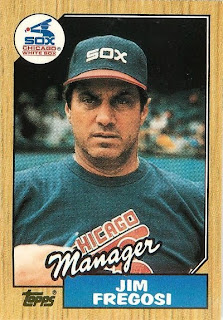 I remember him more as a manager with the Philadelphia Phillies and Toronto Blue Jays from the early 1990's through the early 2000's than as an actual player - the first time I probably heard of him was when I stumbled upon his 1987 Topps card when I was a kid getting into card collecting.

Of course as an Angels fan, I've learned more about Fregosi as one of the franchise's best ever position players at shortstop - he had an early start to his MLB playing career, but seemingly past his prime as he hit 30, he was infamously traded to the New York Mets for Nolan Ryan and three other players.