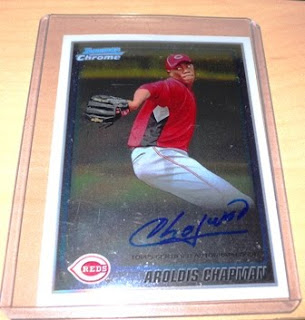 I got a replacement for a 2010 Bowman Chrome autograph of Aroldis Chapman - it sort of ends the initial saga that started when I impulsively bought a box of 2010 Bowman Chrome for $39.99 shipped, when I clicked the a link to the eBay auction on Atlanta Sports Cards on Black Friday.

After sending payment and eventually getting my box, I ended up pulling the Cuban Missile's autograph - unfortunately everything stopped when I realized the autograph on the card wasn't just streaked, but it looked like the autograph had just beaded up.

I ended up sending the card back [along with a base cards of Vladimir Guerrero and Cesar Valdez that suffered some surface damage] to Topps late in December - I was worried about getting a positive response because I was told [through a trading card forum I frequent] to send the cards and a letter in without all the rigmarole Topps has apparently had collectors go through in recent years.

There is also a Bowman Chrome wrapper redemption program going on - so I couldn't send in the wrappers I had in-hand in case Topps had needed it as proof of purchase or whatever.

Perhaps my letter explaining my situation and the cards I sent in would go into someone's circular file - maybe I'd get an explanation it was too late to send the damaged card in or there was no more replacement Chapman Bowman Chrome autographs. I dreaded the idea I'd get an Anthony Bass or a Ehire Adrianza autograph for my impulse box purchase.

There was a note from the post office in the mailbox on Thursday saying I had to sign for a certified mail package and if I didn't get it by last Saturday, it was going to be sent back to the sender - I assumed it was for me, because the sender was listed as 'Topps.'

I took a trip to the post office last Saturday and had to sign for my certified mail package at least three times [including writing out my name and address at least once] - I opened the mailer sent to me and inside was my replacement cards in individual top loaders, but not in penny sleeves. There was no letter or anything else, just my cards.

I want to say I don't know if the replacement Chapman card was in better condition that the one I originally pulled - however, the autograph on the card was definitely cleaner, so that is what counts for me.