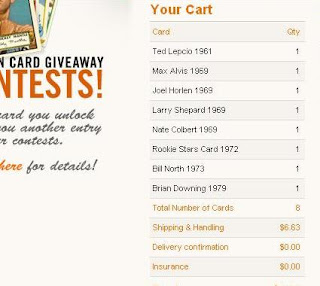 Another picture of the list of cards - I'll now know I'll have delivered to me through the Topps Million Card Giveaway, a day or so before the promotion ends.

I figure that at the very least I'll be able to say I was one of the collectors who took part in having cards delivered from this promotion - instead of just blowing it off and choosing not be part of the collective.

I think the best part of the promotion was being able to trade the virtual cards before having the option to have them delivered - I didn't have anything special and I didn't get any substantial offers, but I was always checking every day to see if someone had offered me a really valuable old-timey Topps card for my drecks.

Maybe I should have kept my 1950s cards, though I'll still have one 1961 Topps common to show for my Million Card endeavors - from the original 'list' of cards I thought about having delivered, I think I already had a 1969 Topps Larry Dierker [found in a dollar scrap bin and eventually autographed TTM] and I was able to trade that for a 1972 Topps Burt Hooton multiplayer rookie card.

I traded for 44 different hole fillers and (hopefully) upgrades to my '79 set and player collections. Wrote about my experiences here: http://thecollectivemind.blogspot.com/2011/02/comments-on-topps-giveaways.html

Have you received ANY of your cards? I'm claiming this is a huge scam. I was one of the lucky few that actually ordered his cards before the deadline, and all I keep getting is one card, per envelope, with a letter apologizing for not being able to secure the card I unlocked, so here is a "more vintage" card as a replacement. Most of the cards I got were soft corners, water/dirt damaged, and complete no-bodies. I have no problem if these were the cards my mom threw away, they're not worth the paper they're printed on. My only salvation is that I know that it's costing Topps lots of money to send me one cards at a time (1.56 in postage), plus the cost of the mailer and the stack of paper repeating my list over and over.

What I don't understand is how, legally, you can run a contest and NOT have the prizes that you stated you had. Since Topps says that cards have NO value, and the only thing is that you get a card that is more "vintage" than the one you unlocked, let me ask this: Would you be happier with the 1993 Derek Jeter or the 1991 Von Hayes?

Remember, the 1991 card is "more vintage". Yeah, and so will be my memories of card collecting. Thanks for chasing me away from the hobby AGAIN Topps.

The 2011 Giveaway will be more of the same. And they will really kill the collector since you can't order more than 25 of your cards each time, so you get hit with excessive S/H fees for cards you didn't even unlock.