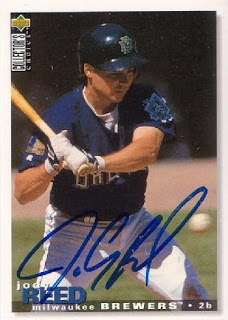 This autograph request took about three years or so and showed up in my mailbox with a $0.41 stamp on 2/10/11 - I knew I'd sent to Reed at some point long ago, though the actual record of what was sent, where and when was probably scratched out on some loose piece of paper long discarded.

I actually found the Word document with my letter to Reed however - the letter was dated July 11, 2007, so I assume that is around the time when I sent the letter.

Reed was a second baseman with the Boston Red Sox who came up in 1987 and spent five full seasons in Boston - before bouncing around with several other teams for the rest of his 11 year Major League career.

For this upcoming season, he was named the manager of the Los Angeles Dodgers' Arizona League team - the postmark on my SASE was from Denver, Colorado and apparently that is where Reed and his family currently lives.