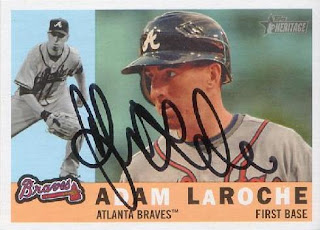 LaRoche is an OK player who might be considered below average when looking closer at the numbers - he has the ability to hit for power though doesn't walk enough to justify striking out a lot.

Nothing else really stands out except he is part of a baseball family - brother Andy was once a top prospect with the Los Angeles Dodgers, but has bounced around a little bit and is now in the Oakland A's organization while their father Dave was a serviceable Major League pitcher.
Posted by Laurens at 8:25 PM
Labels: 2009 Topps Heritage, 2011, Adam LaRoche, Arizona Diamondbacks, Atlanta Braves, autograph requests, Boston Red Sox, Pittsburgh Pirates, successes, through the mail autograph, Washington Nationals