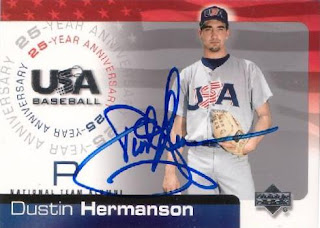 Dustin Hermanson c/o home - he signed my three cards in blue Sharpie in about a month, including a 2004 Upper Deck Team USA 25th Anniversary card for my set.

Originally the No. 3 overall pick by the San Diego Padres in the 1994 Amateur Draft - Hermanson was an OK starting pitcher for the Montreal Expos and St. Louis Cardinals from the late 1990s through early 2000s before it looks like injuries derailed his ability to be a full-time starter.

However, in his final full season in the Major Leagues - Hermanson did record a 34 save season for the 2005 World Champion Chicago White Sox.