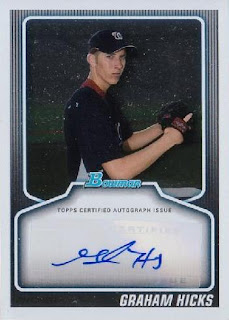 There were 2011 Topps blasters at Walmart for $19.98, but I prefer the Target Throwback variations - since the Walmart cards are mostly 'blacked out' except for the image, which makes any particular card worthless to be autographed in-person / through the mail.

There was a 72-card box of 2011 Topps for around $10 - which I was tempted to get since I hadn't seen the packaging [it kind of resembles a box used for gaming cards and it isn't the 'cereal boxes' used in previous years] used in baseball before.

It maybe just random, but the two Targets I went to didn't have any 2011 Topps blaster boxes - all I found at the Target closest to my home was a pack molester doing the deed with some Upper Deck hockey packs; guy was focused on getting to second base with multiple packs and was otherwise oblivious by my presence. I was actually more uncomfortable seeing what he was doing than he was in seeing me.

There was a Toys R'Us next door to the Target which had Jumbo Packs and blaster boxes of 2011 Topps - but I don't think the Toys R'Us blasters have either the Walmart black variation or the Target Throwback variation. Also for some reason, their rack packs are priced a dollar higher at $5.99 and their blaster boxes are actually priced at $23.99. 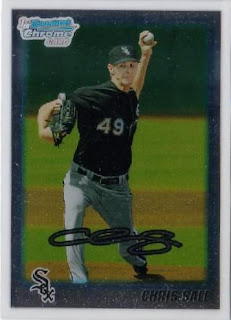 My one Value Pack of 2010 Bowman Draft - I picked up a complete set, but perhaps having extra cards from some of the players from this set will give me an opportunity to get those players on multiple cards.

Bottom
#BDP 91 Mitch Moreland Chrome
#BDP 28 Vance Worley Chrome
#BDPP 92 Chris Sale Chrome - though a lefty, he's been compared to Tim Lincecum because he is a rather smallish guy with a rocket for an arm.
#BDP 33 Travis Wood Gold parallel 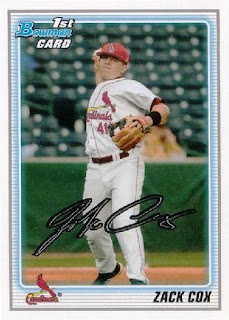