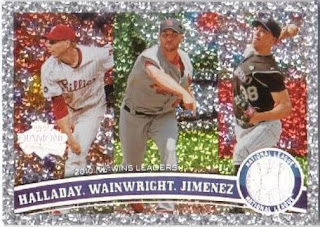 I picked up three $4.99 jumbo packs of 2011 Topps at Target - flagship Topps is always refreshing to rip when they first come out.

I like the white bordered base cards on this Topps' fare for the masses and it seems like the images on this year's cards really sharp - the images are bright and clear, instead of being dull, uninspiring and gloppy.

I was keeping my eyes peeled for any Diamond Sparkle variation, thinking I was going to find at least one out of my racks - but these short print parallels maybe harder to find than I had hoped.

I think like everyone else, the Platinum Diamond variations are pretty sweet looking - collecting them all is not realistic, but they are 'prettier' and much easier to pull than the cards with a doctored sparkle on them. I normally wouldn't care about the 2010 NL Wins Leaders card [#11] I pulled, but the Platinum Diamond treatment makes enhances the card's aesthetics. 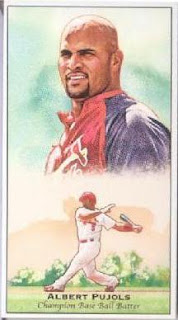 I pulled an Kimball Champions Albert Pujols insert, which was nice - but these mini cards look sort of homemade.

I pulled other inserts, which I didn't really find all that interesting I guess - all I know is I probably don't need a reprint of a 2004 Topps Mark Teixeira [#60YOT-53] or a reprint of a 1999 Topps card of Mike Piazza, Ivan Rodriguez and Jason Kendall [#60YOT-48].

Play at the Plate said...

With so many people wanting those diamond parallel cards, they will probably be going at a good premium for awhile.