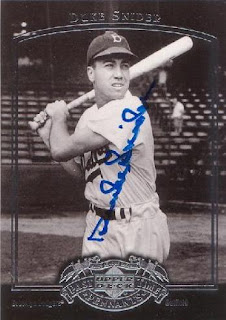 Duke Snider's passing on Sunday may mean more to old-school baseball fans and in particular, those who grew up with the Brooklyn Dodgers - however he was a Hall of Fame legend who seemed to enjoy a reputation for being a gracious signer in-person or through the mail.

With regards to autographs, this story captures just about everything I know and perhaps want to say about Snider and signing autographs - perhaps good and bad.

As far as I was concerned, I never met him in-person and Snider used to refused or 'RTS' mail sent to his listed address - when I started to write him in the early 2000s.

In my experience, I remember having to mark the envelope, 'donation enclosed' to get any sort of positive response - things got better however and for a period of time the successes from Snider in the middle of the 2000s came flooding in.

May Mr. Snider rest in peace.