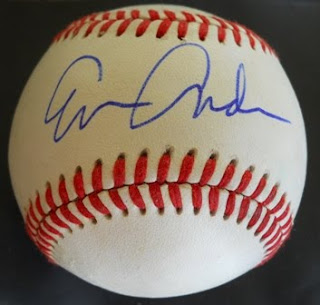 At the 2010 Futures Game in Anaheim - she scrawled out her autograph quickly on one of those white, thick filler decoy cards. I saw her again signing along the railing before the Futures Game and got her to sign a random International League baseball that I got during BP at an Angels game. 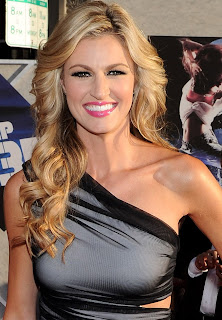 Recently I was leafing through Athlon Sports Baseball 2011, one of the baseball fantasy/preview/guides - there was a blurb about one-time independent league and current Boston Red Sox outfielder Daniel Nava always leaving tickets for Andrews in the minor leagues. 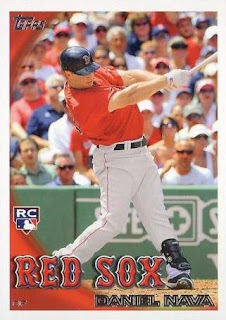 It isn't a new story, just adds to Nava's feel-good rookie year in 2010 - I'm not going to say it is disturbing at all, Andrews has been all over the place [good and bad] in the last couple of years and she's a fantastic gal to look at.

The blurb was pretty straightforward, but image used in the magazine blurb just struck a certain cord - I may have no life, but I was compelled to pick up the magazine for $8 and clip the blurb out with Andrews all glammed up and wearing an outfit highlighting her best assets.

Instead I saved my $8 and found full-size images online, making me very happy - I cropped one of the images I thought was probably the most similar to the one I saw in the magazine.

Edit: Added the first image, which definitely was the one used in the magazine. 4/2/11