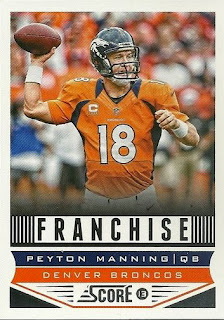 As the most casual of NFL fans, I started to lean on the idea the Denver Broncos were probably going to roll past the Seattle Seahawks in Super Bowl XLVIII and with no rooting interest - was just hoping the team from Seattle had enough plays on offense to make things interesting, if not pull an upset to make a good game happen.

This was Peyton Manning's Super Bowl, this was where he was going to put the finishing touches of his legacy as the best quarterback whose ever played in the NFL - if I had a dollar for every time I read a Facebook comment [on ESPN stories] or other forums about Manning was going to throw at least 3 or 4 touchdowns with 300-400 yards passing, while giving Richard Sherman his comeuppance, maybe I'd be a hundred dollars richer by now.

Every fan, every pundit made it so much about Manning - not that Manning hasn't deserved the accolades as an all-time great, but the love has gotten to be too much at times and it's nice to see the narrative flipped.

There was such intense feelings of schadenfreude when the game was unfolding in an eventual 43-8 thrashing of Manning's Broncos - I'd pump my fist or yell when Manning's duck passes would be picked off or the Broncos' drive would fall short.

It reminded me when Manning was at his postseason peak and I had this irrational desire to see him get smacked around [probably for the same reasons I wanted to see him fail on Sunday] - when his Indianapolis Colts played the New England Patriots in the mid 2000's.

As a Hawk fan... I didn't feel comfortable until the 4th quarter when they went up by 35 points. Even though I had watched Seattle's defense dominate opponent's passing game all season long... I kept thinking Peyton might somehow turn things around and have this super hero turnaround that people would talk about for years. Thank goodness that didn't happen. Go Hawks!

I felt the same way, believe that - the only reason to watch the game from start to end was wondering whether or not the much maligned Manning would find a way to lead his team back somehow.