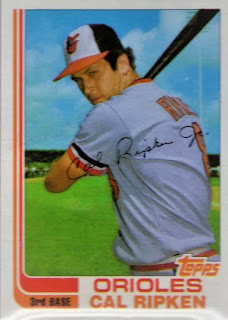 I picked up a copy of this card because Ripken Jr. was a star who was on the verge of an iconic milestone when I was really getting into baseball fandom through the mid 1990s - this is probably his best mainstream rookie-year card and maybe the adolescent in me would be really impressed to have this in my personal collection.

When I started really collecting as a kid, I remember 'finding' Ripken Jr.'s 1982 Donruss RC during a visit at an acquaintance's house - afterwards, I had to tag along with my parents to look for carpeting in what would be the family home.

I was bored and I took some tape off a dispenser I was playing and stuck it on a part of the card - I peeled the tape off and just like that I'd damaged a card worth a whopping [at least to me] $8 at the time; maybe it was simply karma for a little youthful indiscretion on my end.

In the early 1990s, I was just starting to get into baseball fandom as Nolan Ryan was knocking down achievements [5,000th strikeout, 300th win, 6th no-hitter] as an elder statesman of MLB - I never got Ryan's autograph when I first started to get autographs in-person, but I was able to meet Ripken Jr. a few times when the year after he broke Lou Gehrig's record for consecutive games played.

Iconic card. Congratulations on adding it to your collection!