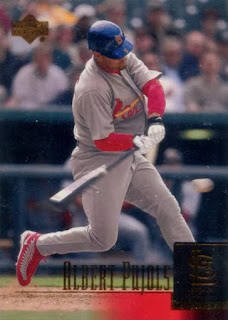 I don't think I actually saw many Pujols rookie cards in his rookie year, so after all these years, I guess I'd like to add at least a couple to my PC - the 2001 Upper Deck and 2001 Bowman [#264] were the most 'widely' available rookie cards from Pujols' rookie year even though all his cards were in demand all season long.

While Pujols rookie card and rookie year issues were pumped out in mid through late season products, but I never had a chance to own but maybe two or three - including a factory set rookie year card from the 2001 Fleer Tradition, maybe an ugly Team Leaders subset card [#435] from 2001 Fleer Platinum RC Edition, a 2001 Topps Traded Pujols / Ichiro subset card [T99] and a 2001 Topps rookie card I bought at a card shop for a quarter maybe in 2002.

I remember finding the Topps Pujols in the particular card shop, when the quarter boxes were color coded with tabs - because the store owner was selling certain rows of cards on consignment.

The Topps rookie had a soft corner and I'd foolishly sent it to Pujols as a TTM autograph request - of course after 17 years, it never came back, even as a failure.

In recent years, the 38-year old Pujols hasn't been as relevant and still has at least 3 years left to go to play out his Angels contract [on the field] - however, Pujols' baseball accomplishments [short of a PED scandal] can't be taken away by what he has done away from St. Louis.