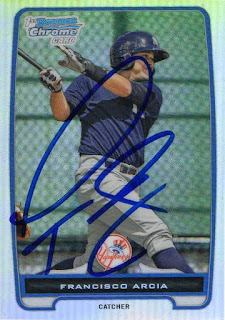 Arcia, who spent 12 professional seasons before reaching the big leagues, has had quite the week - hitting a pair of home runs and collecting 10 RBI in his first two MLB games for the Angels.

When Arcia was signed by the Angels as minor league depth, I picked up this 2012 Bowman Chrome refractor to pair up with a lone card I had - I was hoping to get his cards signed in-person during a spring training trip in 2017, but that didn't happen.

Digging through my notes about miscellaneous card pick-ups, I actually picked this up as part of a group of 120 cards I picked up for $8 and loose change at a card shop last fall - I typed out Arcia was a minor league journeyman 'who was in the Angels system this past season [2017], likely somewhere else next year.

In 2018, Arcia ended up back in the Angels system as minor league depth and I was able to get my cards signed - when Arcia was playing with the Salt Lake Bees.

Nice one Laurens! Didn't even know Arcia had a card.