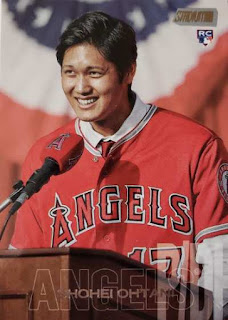 I picked this card up to see if I could add some pack pulled rookie year cards of Ohtani on the down low - I want to see him back on the mound at some point, but that maybe in 2019 or even in 2020.

Considering what he has accomplished in his MLB season, even if he never steps on the mound again and is merely an 'OK' hitter, I'll probably keep any of his cards I find or pull - he can be a designated pinch runner or a peanut vendor in the stands at this point, but he's on my all-time list as a regional fan favorite.

At the very least one half of Ohtani is actually playing at the moment, though it's hard to say if Ohtani the hitter can trend upward - I try to catch his at-bats and with the swings he has taken, looks crossed up more often than not.

It looks like he's been exposed by opposing pitchers and the number of strikeouts look to pile up in bunches - on other hand, I believe Ohtani's talent and aptitude with play out over any rough stretches.

I have a Shohei Ohtani Stadium club rookie card 138 with no name on the front.. any information on this?

The Ohtani could be a super short print card or just some other wrinkles - eBay had a couple of completed listings from two sellers but that is it so far.