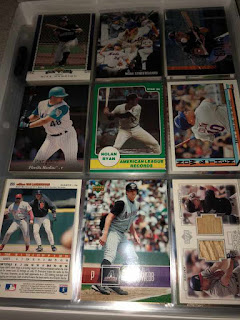 I grabbed 18 'pitchers hitting' cards for my mini-collection sampler and the collecting topic subset is kind of a catch-all - for pitchers who have bats in their hands but aren't exactly hitting in a game, wearing batting helmets, bunting, practicing and finally, pitchers whose cards show them on the basepaths.

Seeing pitchers act the role of hitters or baserunners can be such a peculiar thing - so it is another neat, easter egg deal to find cards with 'action shots' of pitchers not doing the usual pitching. 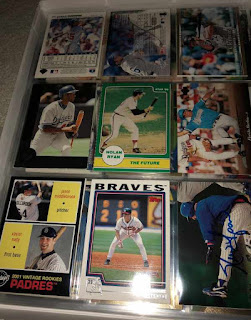 Looking at the cards on the page, I realized the Nolan Ryan cards in the center are from the pre-DH days of the American League - in his lone season batting in the AL without a DH, Ryan was 13-for-96 with five doubles and one triple.

Agreed - it's novelties such as these photos which make baseball card collecting so entertaining and engrossing!

This is my oldest mini-collection, and probably my favorite one, too. That Nolan Ryan is spectacular.