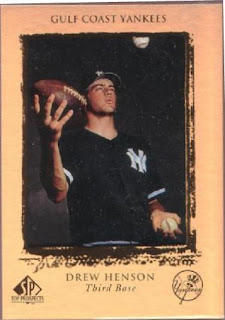 Here is my retrospective on 10 busts and disappointments over the last 10 years - Drew Henson was an easy choice for No. 1, since he managed to flop in two professional sports after being highly touted super-athlete in high school/college.

1.) Drew Henson - played one too many sports and had one too many holes in his swing. He was destined to be either John Elway as a quarterback or perhaps Scott Rolen as a third baseman.

In the minor leagues, Henson was exposed as having too many holes in his swing and after bouncing back-and-forth between the New York Yankees and the Cincinnati Reds - he decided professional football was his true calling.

However, Henson washed out as a second or third string clipboard holder in the NFL as well - never really becoming a very good professional baseball player or a decent professional football player.

When he was initially a hot commodity back in the late 1990s - his hottest card was a 1999 SP Prospects Minor League card, which was perhaps a $10-$20 card at one point.

It is hard to believe a minor league base card that was available in packs would command some value - I don't recall the furor over the card, though part of the hype was due to Upper Deck releasing the card while Henson was still playing football at Michigan.

Now the card is worth about a quarter or less and is a reminder why hobby hype over two-sport stars simply isn't warranted - over a comparable player who focuses on one sport, whether you are a football card collector or a baseball card speculator. 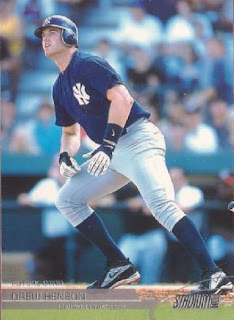 Great Pick, the only guy this decade to be a bust in 2 sports

found the card in a dime box recently.

Saw him play in Columbus. He got booed at home games because he played QB for Michigan.