Here is my retrospective on 10 busts and disappointments over the last 10 years - it really isn't my point to make fun of these players' accomplishments, but as a baseball fan who at times likes to speculate on the future stars, sometimes I wonder what happened to these guys that were supposed to be at least perennial all-star talent. 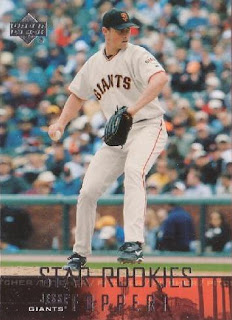 4.) Jesse Foppert - was the next Tim Lincecum, several years before Lincecum was drafted by the San Francisco Giants. Foppert was bigger and had the ideal projectable pitcher's body, but injuries [i.e. Tommy John surgery] apparently derailed his promising career. He ended up bouncing around in the minors, unsuccessfully trying to regain his footing as a professional. 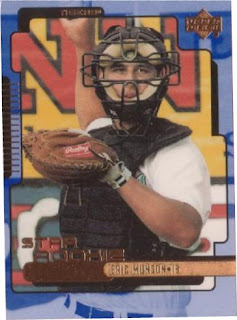 3.) Eric Munson - he was the No. 3 overall pick out of USC in 1999 and while his rookie card was actually in the 1999 Upper Deck Ultimate Victory product, it meant a little something to me when I pulled a 2000 Upper Deck card since I thought he was a future star. Now I just look at his career and think as perfect of a life this guy may have being paid to play professional baseball and all the fringe benefits playing in parts of nine Major League seasons has brought him, the journeyman catcher still has a lifetime batting average of .214 and little to show for his high draft pedigree.