Congratulations to Andre Dawson and his election to the Hall of Fame - for us fans and baseball experts who debate whether or not a player of his caliber is worthy of induction, it doesn't matter because Dawson is in the Hall of Fame.

On the other hand, there are talented players who don't have one-third a career Dawson has enjoyed - it is kind of fun to poke around and see the once highly touted players coming up the professional ranks, only to hit a wall at the Major League level.

My original definition of a bust is a player who fails to reach the Major Leagues after having some sort of hype thrown at his direction - if a particular player reaches the Major Leagues, then the player should be considered a professional success. On the other hand, if he did little once he got to the Majors, then he has to have the label of a 'bust.'

However, if the player never really fulfilled any sort of expectations after reaching the Major Leagues - I'd like to believe the player is still a bust.

However, there are certain players who didn't live up to expectations after being hyped up as top prospects - being labeled a disappointment isn't the worst thing if a player has had at least a useful three or four year Major League career and has survived to play in the Major Leagues for a period of time.

Here is my retrospective on 10 busts and disappointments over the last 10 years - I've got a small stack of their cards filed away just to remind me not to believe the hype, whenever a hotshot baseball prospect [Stephen Strasburg in the pros or in the amateur ranks, Bryce Harper] is being bandied about as the next all-star or superstar. 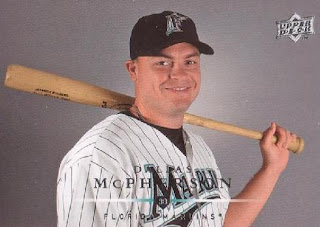 10.) Dallas McPherson - as Angels fan, McPherson leaves a bitter taste because of the injuries ravished his career. He a 'country strong' hitting prospect, who tore through the minors and was supposed to be Troy Glaus' replacement. On the other hand, even though he was a crown jewel of the Angels' system, he was sort of an 'older prospect' who had holes in his swing. Regardless, if healthy, I thought he could hammer any flaws out and don't see him as a complete flop. 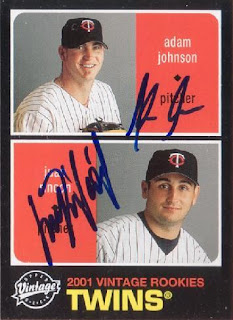 9.) Adam Johnson - the second overall pick in the 2000 draft, the Cal State Fullerton product's lone cup of coffee in the Major Leagues in 2001 included allowing 23 earned runs in 25 innings. I remember Phil Nevin and Mark Kotsay as the most highly decorated and touted CSUF baseball players in the last 20 years, but I don't know if I actually followed Johnson at CSUF to even consider him in the same class with the two.

Maybe he snuck up on people and turned out to be a guy who'd be easier to sign than others available - the Minnesota Twins had better luck in 2001 when they picked a guy named Joe Mauer No. 1 overall, who was also tabbed an easier sign, than the consensus No. 1 talent in Mark Prior. 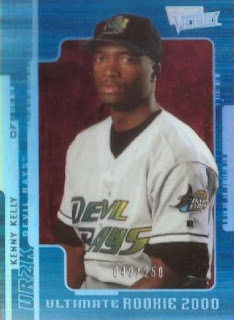 8.) Kenny Kelly - a two-sport star, his athleticism never translated into something decent as a pro baseball player and he never got a prolonged opportunity to stick in the Major Leagues after making his MLB debut with Tampa. I remember trying to pick up a couple of his cards on eBay, thinking he might actually some kind of good player.