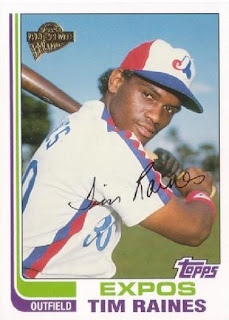 Pro - he might have been the best lead-off hitter of his generation, if Rickey Henderson wasn't running away with all the headlines.

On the basepaths, Raines stole 808 bases in his career, including six seasons of 70 or more steals - he also scored 1571 runs.

An apparent cocaine addiction didn't stop Raines as his career peaked in the mid 1980s - through the decade, he was a seven-time All-Star and was the 1987 All-Star MVP.

Con - Raines was an exciting player, but was overshadowed by Henderson, particularly when Raines was playing in Montreal.

Oakland wasn't Montreal and more importantly, that time around the early 1980s - the A's had gained some notoriety with "Billy Ball," with Henderson to focal point of an upstart team in the Bay Area.

Raines played on World Series championship teams with the New York Yankees in 1996 and 1998 but in comparison to Henderson, who won the 1989 ALCS MVP - Raines was never the lone dominant player in one postseason series.

Would it be a reasonable thought that hanging around for four or five more seasons until he was 42 hurt his Hall of Fame chances just a little bit - Raines was a pretty good player for a long time, but his star seemed to shine the most in the 1980s and by the mid 1990s, had faded into relative baseball obscurity as a part-time bench player.