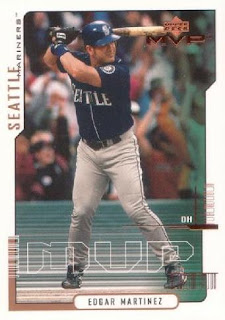 I don't have a vote, but just like every other baseball fan - I'd like to think my 'simple man' opinion counts for something and I'd like to go through candidates eligible and worthy of consideration.

Pro - healthy on-base percentage/power numbers, won a couple of batting titles and finished with a .312 lifetime batting average. He also spent his entire professional career with one organization, never gotten in any sort of trouble and was an otherwise model pro athlete.

Con - he shouldn't be knocked by being a designated hitter, but identifying him with the DH makes him seem one-dimensional and hinders perception of his overall career.

He didn't have to worry about whether or not he was to bulky to play the field - all he had to worry about was watching the game from the bench and waiting for his four or five at-bats in a game.

Besides his inability to take the field, what really hurts him is somehow he found himself floundering in the minors through his mid 20s before getting an extending opportunity to stick with the Seattle Mariners - it hurts his overall numbers, especially when in his hitting prime, he wasn't considered a position player.

Martinez was a very good player for a long time and a particularly great hitter - but he falls short this time around.

I feel hes a Hall of Famer, but my vote would be biased im a M's fan, and he's one of my favorite players of all time, seen him hit a Grand Salami once :D