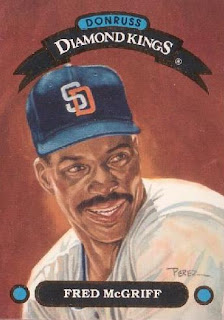 He propelled the Atlanta Braves in their chase to win the National League West championship in 1993 - the last real pennant race.

He finished with a .377 on-base percentage and a .509 slugging percentage.

Con - McGriff's numbers are easy to ignore, because as the power numbers exploded through the mid 1990s, there was no real 'jump' in The Crime Dog's home run totals.

While sluggers of comparable ability were slugging past his best home run totals on a perennial basis - McGriff wasn't hitting 40-50 home runs like everyone else through the mid to late 1990s.

McGriff's legacy will forever be linked for endorsing Tom Emanski's baseball instructional videos - McGriff was a great slugger and if he had starred from the 1970s and early 1980s, maybe the consistency in his power numbers would be seen with more relevance.