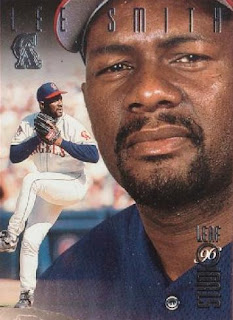 Smith was an intimidating figure 6'6" but never really had the 'signature theatrics' of a modern-day closer from the last 30 years - it seemed like he was the time who went about his business closing games out and then had a beer after the game.

Con - Smith piled up a bunch of saves in the regular season, but in his only postseason appearances in 1984 and 1988, he was 0-2 in four games and was bombed for nine hits and five runs in 5 1/3 innings. If his teams had advanced further than they did in the playoffs, Smith's accomplishments in general would be held in higher regard, especially if he was a closer for a World Series championship team.

With the elections of Bruce Sutter and Goose Gossage, maybe a precedent has been set to look deeper into role of a closer as far as consideration for the Hall - Smith benefits because he was pretty good for a long time, regardless of how many teams he played for. Unfortunately, his lack of postseason glory with the Chicago Cubs or the Boston Red Sox maybe the reason he is looking in from the outside.

It will be great to watch Boston Red Sox,i have bought tickets from http://ticketfront.com/event/Boston_Red_Sox-tickets looking forward to it.