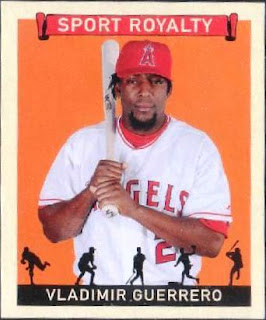 It was decided a while ago that Vladimir Guerrero wasn't in the Los Angeles Angels plans for 2010 and beyond - now, he is close to signing with the Texas Rangers, an American League West opponent of the Angels.

It was fun watching this guy hit in an Angels uniform - hopefully Vlad acquiesces to some fans requests to see him up close and to say thanks for all the dazzling numbers he put up as Halo.
When he comes back to play his first game as an opponent at Angel Stadium - a standing ovation before Vlad's first at-bat would be something memorable he should take in regardless of how things ended in Anaheim.
Posted by Laurens at 12:02 AM
Labels: free agent, Los Angeles Angels, Texas Rangers, Vladimir Guerrero