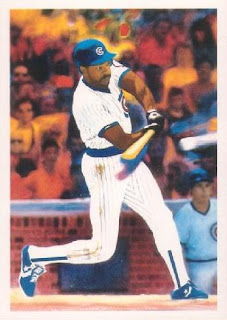 Pro - he was a multitalented outfielder who was the 1977 National League Rookie of the Year with the Montreal Expos.

An eight-time Gold Glove winner, playing in Montreal diminished Dawson's abilities because apparently Astroturf was fake, synthetic grass layered over cement - it did much damage to Dawson's knees and hindered his ability to run and field over time, despite finishing with 314 stolen bases in his playing career.

Dawson and his agent apparently negotiated a 'blank' check after 10 years in Montreal and signed on with the Chicago Cubs - despite playing for a last place team, Dawson hit 49 home runs and had 137 RBIs in his 1987 National League MVP season.

Dawson was four-time Silver Slugger winner who hit 20 or more home runs in 13 of 21 seasons in the Major Leagues - finishing with 438 home runs and 1,591 RBIs.

Con - a player with a .323 on-base percentage may have been a little more patient and take his walks but one lone number shouldn't define the type of ballplayer Dawson was.

Citing his on-base percentage seems to marginalize Dawson's relevance when he was an active player - he found a way to succeed despite his .323 on-base percentage and being one of the best all-around outfielders during his time, he cannot be denied longer.