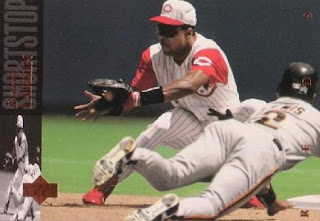 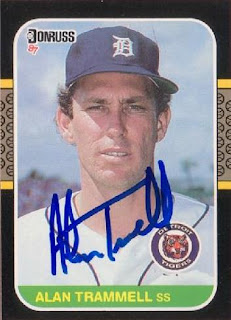 I don't have a vote, but just like every other baseball fan - I'd like to think my 'simple man' opinion counts for something and I'd like to go through candidates eligible and worthy of consideration.

Pro - he was a dynamic player who had the ability to do a variety of things such as hit for average, take a walk, run the bases, hit for power, be a good defender and generally be a good clubhouse influence for his Reds' teams, including the squad that won the World Series in 1990.

His numbers are generally impressive - but maybe he just wasn't healthy enough, where he may needed a stretch of playing 150 games for at least five or six years to vault his final career totals as a slam dunk Hall of Famer.

Pro - there seems to be a lot more endorsement for Barry Larkin, but long-time Detroit Tigers fans are saying, 'wait a minute - what about Trammell?'

Con - like many Major Leaguers, Trammell's peak seemed to be in his late 20s. Once he hit his 30s, he was still a capable player, but the number of games played started to dwindle.

Trammell's numbers were very good - but he wasn't able to finish stronger than he did.