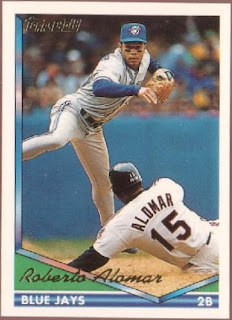 He stole 474 bases and was a constant threat - at the top of the lineup.

His lifetime hitting marks include winning four Silver Slugger Awards - and finishing his career with 2724 hits.

His other lifetime batting marks include a .371 on-base percentage and a lifetime .300 batting average - Alomar had 504 doubles and hit 210 home runs with a .443 lifetime slugging percentage.

Con - Alomar spat on an umpire in 1996, leaving a permanent stain on his accomplishments, altering the perception of him that still lingers among fans, the media and maybe those in the game.

The year 2001 was the last great season for Alomar, but he was still looking to be on his way to getting 3,000 hits - however he ended up bouncing around as the latter part of his career careened off a cliff and was forced to retire without reaching the milestone.

Personal problems bubbled up for Alomar in 2009 - when an ex-girlfriend filed a suit against him with claims Alomar had exposed her to AIDS.

Reading about how Alomar's career crumbled in his last few seasons was disappointing - and reading accounts of his ex-girlfriend's claims was particularly disturbing.
However, Alomar shouldn't judged by rumor and innuendo - as a 10-time All-Star and a 10-time Gold Glove winner, his accomplishments on the field speak for themselves.
Posted by Laurens at 2:58 PM
Labels: 2010 Hall of Fame candidate, Arizona Diamondbacks, Chicago White Sox, Cleveland Indians, New York Mets, Orioles, Roberto Alomar, San Diego Padres, Toronto Blue Jays