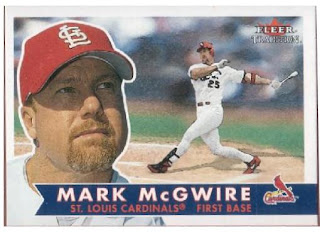 Pro - MCgwire was the dominant home run slugger of his era, the main attraction for a sport reeling from a strike in 1994. Along with baseball's Michael Jackson [well, that is who Sammy Sosa resembles these days], McGwire helped reinvorated the game with their home run hitting exploits back in 1998.

His lifetime slugging percentage was .588 and his on-base percentage is .394.

Con - he may have always had the ability to hit for power, but through nine seasons and the age of 31, he only had 238 home runs, his lifetime batting average was .250 with only 834 hits.

There are fans, members of the media and baseball experts who probably believe while McGwire used something - he never touched one PED that helped him put up seasons where he hit 39, 52, 58, 70 and 65 home runs from 1995 through 1999.

His reluctance to speak at the congressional hearing back in 2005 seems like a smoking gun as far whether or not he used - "I'm not here to discuss the past," or, "I'm here to be positive about this subject."

Maybe the PEDS helped a player like McGwire sustain his health and a rational can be justified about wanting to be healthy to play a game one loves and is getting paid for - on the other hand, any possible drug use may have propelled a player like McGwire's career into unnatural heights during the Steroid Era.

If baseball fans and the media are really interested in holding the players accountable for cheating - someone like McGwire should probably be looked upon as the biggest fraud.