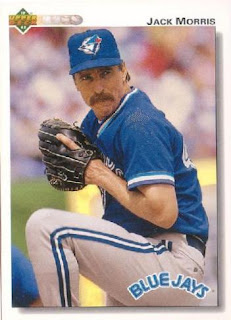 Pro - if there was a Hall of Moments, he'd be in along with someone like Roger Maris, particularly for his performance in Game 7 of the 1991 World Series, where he gutted out a series clinching performance with 10 shutout innings over the upstart Atlanta Braves.

He pretty impressive in the 1984 World Series for the juggernaut Detroit Tigers with - two wins, 18 innings pitched, allowed four earned runs and struck out 13 against only three walks.

The winningest pitcher in the 1980s, Morris started 527 out 549 games in his Major League career and was a workhorse - he completed 175 games along with 28 shutouts.

Con - there seems to be more of a quantity rather than quality aspect to the numbers he put up. He probably got another ring with the Toronto Blue Jays in 1993, but imploded with a 7-12 record and 6.19 ERA. He got pounded for 189 hits in only 152 innings and didn't even pitch in the postseason.

If Morris had retired after the 1992 season, maybe his lifetime ERA looks a little better, even with 17 less wins [total number picked up between 1993 and 1994] - maybe he'd look better to voters to see him finish his career with a 21 win season instead of appearing to hang around two seasons too long.